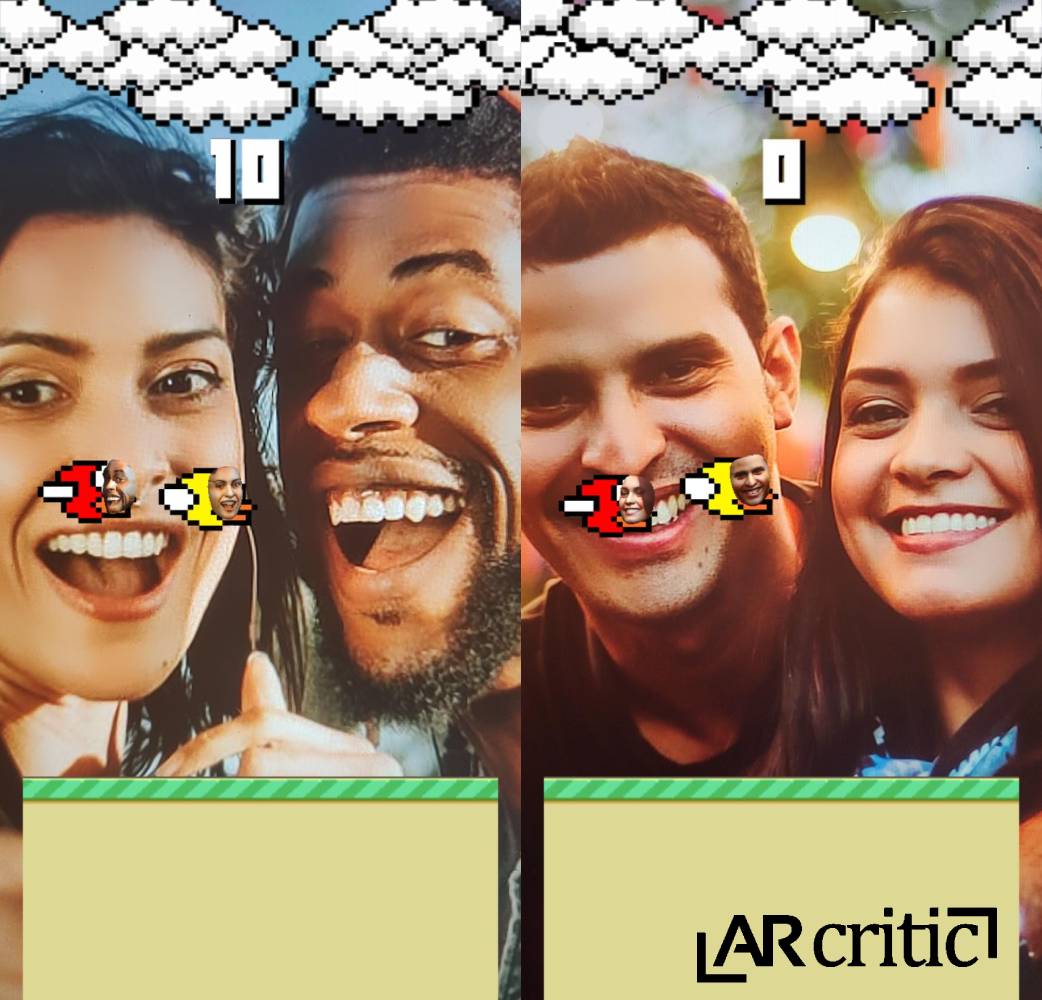 Flying Face is an Instagram filter developed by @dvoshansky, a Spark AR developer. This AR mobile game resembles the original Flappy Bird game that was released in 2013.

I’ve seen different takes on the original Flappy Bird formula and this is by far one of the most exciting ones. I have to say it up front, that I wasn’t a fan of the original game, and I think it’s because the average gameplay session for me was about 10 seconds the most. Of course, not everyone is like me, and many people love to take on that challenge.

It doesn’t mean that I didn’t get back to it and tried again. Yes, the original game is addictive and ‘Flying Face’ is not less addictive. I personally found it more difficult than the original but I’ve seen that for many people it seems easier. After all, all you need to do is just blink. People blinking capabilities are beyond what I’ve imagined, seriously.

The game blink readout is super fast so the game feels very responsive. I’ve seen some people blinking so fast in so close intervals, that the bird appear like it was flying straight, almost straight. This is when I saw how brilliant the controls are and I needed to see other people playing than judge the gameplay by my own bad blinking capabilities.

Maybe my eyes are not as they used to. When I played, I didn’t bink super fast so I had those blackouts. This is obviously because the eyes were closed. By saying ‘long time’, it’s still a split of a second, but it still long enough to cause you to get out of concentration and not get a clear view of the upcoming obstacle. With more practice, I was able to improve on that, but still, I couldn’t pass the 20 points.

I’ve seen some insane scores of people playing Flying Face. I don’t know what’s the current Flying Face World Record score is, but if you want to know, you probably need to search Instagram or YouTube. People are uploading videos of them playing or images of the highest score. I don’t know about images though, this can be altered, the videos I trust more.

Flying Face IG filter adds some new interesting features upon the original game. For example, one of the best features, in my opinion, is the option to play the game alongside a friend locally on the same Android or iOS phone. You play cooperatively. This means that if one player fails, the other one can continue going and the total score is one of the players that passed the most obstacles. It’s like having two lives, kind of.

You can also play it competitively, but there is no separate mode for it. The only difference is that if the other player fails you win and vice versa.

The bird looks quite similar to the original game but instead of having a bird’s face, your face is anchored to the bird. If you play two people, each bird inherits the player’s face that controls it. It’s super fun playing like that, although the faces are quite tiny. That being said, when you see video playbacks it’s super fun to watch.

One of the things that were missing for me is the option to play the game on the face itself. I imagine how amazing it would be to have a “Face mode”, where the game plays on your skin. This way, the obstacles appear like drawings passing over your skin and the Flappy Bird is located in the center of the face, probably over the area of your nose in the middle of the face. The clouds will fly over your forehead and the points will appear maybe on your chin or cheek, I’ll let you find a good place for it.

There are other things that I wished were available in this game, including a global leaderboard, and the option to play online versus or with other players online. Speaking of the last option, just think how amazing it can be playing Instagram (or Facebook) IG filter games like this one where you can see the other player, maybe using split screen (vertical or horizontal split) or maybe a small overlay window. I was thinking in my head a situation where I play Dvoshansky’s Flying Face IG filter like that and in my head, I had so much fun. Maybe in the future though.

If you search for some Flying Face gameplay videos on YouTube, you can see how fun it is watching people playing the game. This is a huge difference compared to seeing just the gameplay video without the person. I don’t even compare it to Twitch-like streaming where you can view the streamer as an overlay. The main difference here is that the player is part of the game itself and the face and body are the controls. This is why the experiences are transferred so well online and why when you see people playing, you want to play yourself.

Dvoshansky’s Flying Bird is a fantastic Instagram filter, one of the most inspiring and entertaining ones out there. I just can’t wait to see what type of games Spark AR creators will deliver to this amazing platform and what’s the next project that Dvoshansky is going to deliver.

A must have Instagram for casual players, competitive players, developers who want to get inspired, kids and adults—everyone!

How to Unlock the Filter on Instagram and Play the game?

To play Flying Face IG filter all you have to do is to follow Dvoshansky’s Instagram profile by clicking the “FOLLOW” button. Once you’ve done that, go to the filter list and you should see the filter as one of the first ones on the left (I tried on Instagram Android app). Now you have it in your drawer and you can play it whenever you want. Don’t forget to share gameplay stories so more people know about this amazing ‘Flappy Bird’ inspired Insta AR game.

I hope you enjoy my review of Flying Face “Flappy Bird” style Instagram game and I hope you find it entertaining and inspiring as much as I did. Thanks for reading.